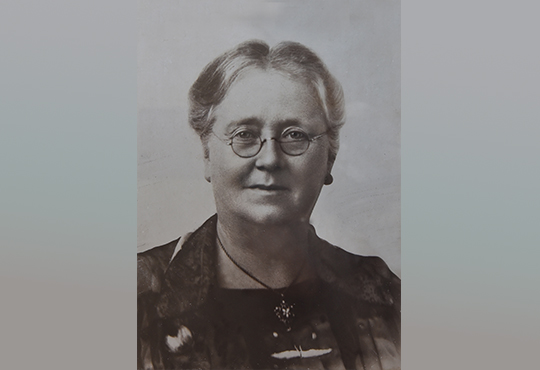 Miss. Alice Kimmins came to India in 1886 as a Missionary of the Zenana Bible and Medical Mission. After serving splendidly in Lahore and Benares, she came to Bombay where she was in charge of the Girgaum Girl’s school now known as the Queen Mary’s School, from 1892 to 1899. Bombay’s climate was unsuitable for the children of European origin. Therefore, she decided to shift to Panchgani to carry on her work to educate children of European descent.

She began her work in Panchgani and started a boarding school with 15 children of European origin of whom 7 were boys. From this beginning there developed the Boy’s and Girl’s school. She launched ceaseless building activity incurring an expenditure of over Rs. One and a half lakh. She added more buildings one by one including Ashlin, Armitage, Willingdon, Kinnaird and Lloyd Wings. She completed Lioyd Wing and named it after Lady Liod, wife of Governor of Bombay. She completed it before she left for England in January 1921. Lady Lloyd opened the new buildings, eulogized the work of Miss Kimmins and called her a Master Builder in more senses then one, giving more credence to character building for which she was regarded as a pioneer...

Miss Kimmins had a wonderful influence on her pupils who always valued and treasured what kimmins taught them. One who knew her intimately said, “It was her daily prayer that her girls should grow into fine noble women loving Christ and being useful in the world.” Her prayers were not in vain.

The teachers in her school held her in high esteem. She referred to her teachers as “Co-workers” and Miss Kimmins always treated them with respect, their troubles were her troubles, their joys were her joys. It was real privilege to work with her. She was an incorrigible optimist and a person of great faith and was positively disposed whatever difficulties she faced. Miss. Kimmins was a versatile person and her interests were wide and varied and not confined to the School alone. She read widely and took keen interest in political and social issues of her times.

She exerted much benevolent influence in Panchgani was described as the “Mother of Panchgani”. She was closely involved in all good work and developments that came up in Panchgani. She was highly respected by all classes whether European or Indian and was loved by all. She opened a mission school for the village children and took keen interest in the development of Panchgani Library and Gymkhana. Miss Alice Kimmins went to England for a furlough in January 1921 hoping to return in due time. Before she left she completed and opened the new building, Lloyd Wings, and all arrangements for carrying on the work of the School. But, she never returned. She passed away on Monday after Easter on 28th March 1921, after a brief illness. The whole of Panchgani mourned her demise. A large number of her friends and students scattered around the country mourned her passing away while thanking God for her life. People of Panchgani, especially the Anglo-Indian community had never had a more selfless and truer friend than Miss Kimmins who served them selflessly with dedication for three decades. The Kimmins High School, Panchgani stands as an undying monument in her memory.